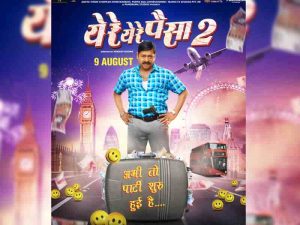 Marathi Movie are mostly seen in Maharashtra. There are limited movies to watch in Marathi. On an average, only 50 to 60 movies are released in Marathi film industry. Here you will find the news about Marathi Films and their latest social updates.

In 2019 many Marathi Movies are Released in Worldwide, In that, more than 10 movies were released in Marathi. In fact, it is very hard to find which is the Best movie. Some movie really great in the box office whereas some movie in a good response from the audience but not reaches great box office collections. Here, we detail of  Marathi movies and their updates and news.

Ye Re Ye Re Paise 2 is a 2019  Comedy-drama Marathi Movie, Flim director by Sanjay Jadhav and producers of the film Omprakash Bhatt, Swati Khopkar production company of movie Zee Studios, Ameya Vinod Khopkar Entertainment. The movie about who beats the man while selling Black tickets inside Dancer becomes an actor. Watch Ye Re Ye Re Paise 2 in a theatre for a better experience.

Mogra Phulaalaa is a 2019 Marathi language Romantic movie directed by Shrabani Deodhar, while Arjun Singh Baran has produced the movie under the banner: GSEAMS. The lead roles are played by Dipti Bhagawat, Sanyogita Bhave while the supporting cast includes Sai Deodhar, Ashish Ghokale. Music is composed by M. Kasim Parvez, while Shrabani Deodhar has provided the screenplay.

Miss U Mister is a 2019 $movieanguage Romantic Drama movie directed by Sameer Hemant Joshi. Nitin Prakash Vaidya has produced the movie under the banner: Nitin Prakash Vaidya. When we consider the Casting of this movie, the lead roles are played by Siddharth Chandekar, Mrunmayee Deshpande while the supporting roles are played by Savita Prabhune, Rajan Bhise, Avinash Narkar, Hrishikesh Joshi. Music is composed by the Music Director Alap Desai, while Sameer Hemant Joshi has provided the screenplay.

Marathi Movie Releasing In May 2019

Sorry is an Indian Marathi film, which is directed by Yogesh Dattatraya Gosavi and produced under the banner called Y.D.G.Films.  The film has an interesting star cast, which includes Sourabh Chirmulla as Sorry or Jay Bhatt. The Music of the film is given by Srirang Dhawale, while the Cinematography is carried out by Harshad Mujumdar. Click here for the details of Where to watch Sorry Full Movie

To know more about the latest TV news and Tv shows visit Hdmedia.club